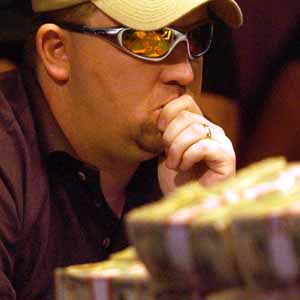 Moneymaker famously qualified for the $10,000 buy-in WSOP Main event in 2003 via a satellite tournament – and navigated the tough field to secure an outright win for $2,500,000 after a heads-up battle with Sammy Farha.

Along the way to the final table, Chris put a bad beat on on poker icon Phil Ivey to eliminate him from the tournament.  with the turn reading Q6Q9 , the chips went into the pot with Moneymaker holding AQ  and Ivey (with 83% to win the hand) holding 99 for a full house.  An ace on the river gave Chris a better full house, and Ivey – (probably the strongest player remaining in the field) was eliminated.

To add to the magic of the victory, it was Moneymaker’s his first time ever playing a live poker tournament.

The Moneymaker tournament win was broadcast far and wide by TV and sports networks – and the idea that a “regular Joe” could turn their hand to poker and win millions ignited huge interest and demand for live and online poker tournaments in the early 90’s (“The Moneymaker Effect“) – and Moneymaker’s name was etched into the poker history books forever.

To this day, Chris is a ‘Team Pro’ for poker brand Pokerstars.