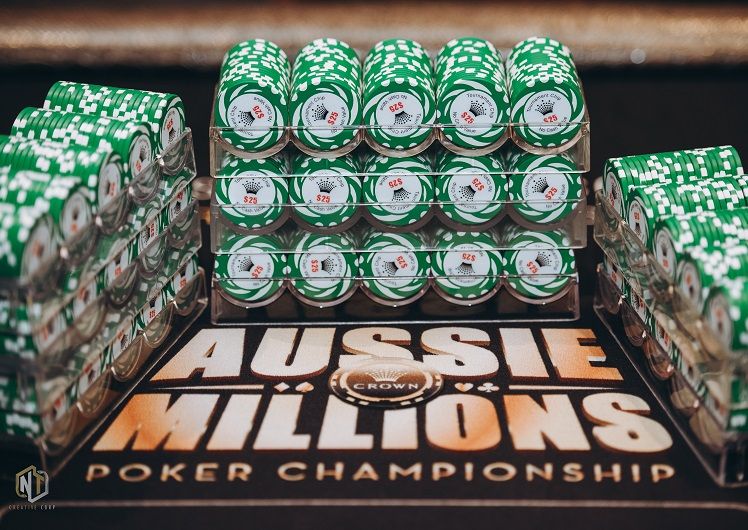 The latest victor to take the title in the 2020 Aussie Millions Main Event was Vincent Wan from Melbourne, known locally as “Wonky”, and scooping a win on AUD $1,850,000 and not to forget the coveted custom made diamond encrusted gold bracelet with a value of AUD$29,500. The event attracted 820 players culminating in a prize pool of AUD $8,200,000.

History of The Aussie Millions

The Crown Australian Poker Championship, or “Aussie Millions” is the biggest poker tournament in the Southern Hemisphere. The tournament is staged annually at the Crown Casino complex in Melbourne, Australia. Crown Casino is the largest casino and poker room in Australia.

Poker at The Crown was first introduced in June of 1997. In July of 1998 the first major championship was held, The Crown Australasian Poker Championship, now commonly known as the Aussie Millions. The main event attracted a field of 74 entrants for the $1000 buy-in, culminating in a prize pool of $74,000. In 2001 the event was moved to January attracting 40 entries with a buy-in of $5,000 all vying for a share of the $200,000 prize pool.

The Aussie Millions continued to grow over the years as more and more Australians adopted the game of Poker, specifically Texas Hold’em.

The Aussie Millions launched into the international pool of poker players in January 2003, attracting a field of 122 entrants and a $1.2m prize pool. By 2005 new records were being set with a field of 263 players all paying $10,000 entry into the main event, this generated the largest prize pool ever in the Southern Hemisphere of $2,630,000. More than 50% of the field were international entries. Fox Sports started to televise the event in 2006 attracting a wide audience and gaining more exposure for the event.

2008 Alexander Kostritsyn took the title, this 21 year old Russian scooped up prize money of $1,650,000 beating another record number field of 782.

2009 Australian Stewart Scott claimed the title and walked away with a very healthy $2,000,000 prize. The field dropped for the first time with 681 players.

2011 for a third consecutive year an Australian player wins the Aussie Millions Main Event title. David Gorr, a 67-year-old grandfather beat a field of 721 to take the title and prize money of $2,000,000.

2012, for the 4th consecutive year an Australian takes the Aussie Millions title. 26-year-old Oliver Spiedel, a banker from Melbourne, wins a whopping $1,600,000, overcoming an international field of 659 entrants.

2014 Canadian, Ami Barer overcame a field of 668 entrants to win the main event collecting a prize of $1,600,000 and a custom made diamond-encrusted rose gold bracelet by LK Jeweller.

2018 Toby Lewis won the title, beating out a field of 800, claiming prize money of $1,458,198, and not forgetting the coveted custom made diamond-encrusted gold bracelet by Anton Jewellery.

2015 Claiming the title, from Australia, Manny Stavropoulos, overcoming a field of 648 players.

2016 Ari Engel of Toronto, Canada, becomes the victor, overcoming a field of 732 players, claiming $1,600,000 million in prize money, and the coveted custom made diamond-encrusted rose gold bracelet by LK Jewellery.

2017 The title returns to Australia, Shurane ‘Shaz’ Vijayaram of Melbourne won the cash prize of $1,600,000 for first place, taking on and beating a field of 725 entrants.

2018 Toby Lewis claims the title along with prize money of $1,458,198 and the iconic custom made diamond-encrusted gold bracelet by ANTON Jewellery. This year’s Aussie Millions Main Event attracted a record field of 800, defeating the mark of 781 set back in 2008.