Unlike NLH, each player is dealt four cards, ‘hole cards’. Players then decide whether to bet, or fold their hand. Once the dealing is complete, players use two of their hole cards, in combination with the community cards, face up on the table, to make their best hand.

With four hole cards, every player has many more opportunities to make big hands with the community cards, so hand strengths tend to be much stronger in PLO games. If hole cards are connected or suited the odds on making flushes or straights are much higher than NLH. If a player holds two pairs in their hole cards they have a higher chance of hitting three or four of a kind, and full houses.

So the best PLO starting hands would probably be those shown below: 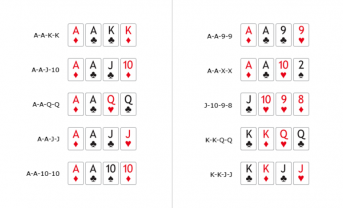 There are about 200 times as many starting hand combinations in PLO as there are in NLH. When a player considers their hole cards, there are many more opportunities to make big hands, especially if they’re dealt the biggest pairs, AA, KK or QQ and especially with double pairs. Connected hole cards, i.e. those that can easily form a straight, and/or suited hole cards are particularly strong in PLO.

BUT REMEMBER… the other players also have many more chances to hit big hands!

The betting in PLO is different from NLH. The minimum a player can bet is the same amount as the player who most recently acted.  I.e. if the last bet was 10 you can call that bet or raise to 20.  The maximum bet is the size of the pot, which is why it’s called Pot Limit Omaha.

Example:  Every player likes their hole cards and pays to see the flop. The pot is now 5.  The first player to act can choose to ‘bet the pot’ i.e. bet 5, making the pot total 10.  The next player could fold, call, or raise.  They choose to ‘bet the pot’, so he bets another 15 (the pot previously was 10 but he needs to first call the previous bet of 5 and then this gives him the pot value he can raise).  The pot size after this pot size bet would then be 30. The next player clockwise has a similar decision and so it continues around the table until betting ceases.

This may confuse some new players but you will get used to it quickly. In the meantime, Poker.com has provided you with a simple option which allows you to click ‘Pot’ to bet, or ‘1/2 Pot’ for example. Simpler, easy and fun!

Once the betting round is complete, the dealer then draws another card and places it face up on the table. This is called the ‘turn’. Players who didn’t fold previously again decide whether to bet, raise or fold, using the same PLO betting rules.

Finally, the dealer draws another card and places it face up on the table. This is called the ‘river’. The remaining players then decide whether to bet, raise or fold. If two or more players bet the same amount all cards can be revealed and the best poker hand wins the pot.

Remember… in Omaha you must only use two of your hole cards, and combine them with three community cards.

BUT… after you’ve been playing for a while you will realize that there are also a number of subtleties, strategies and tactics that you can learn how to use to your advantage. Even the most experienced players keep learning

There are some other simple things you need to know before you get started.

At the start of each hand you need to be aware of where the dealer button is. This indicates which player is the nominal dealer for that hand. Before the dealer begins, the player immediately clockwise from the button puts chips in to pay the “small blind”, this is compulsory. The value of chips required for the blinds is decided by the table limits which are posted for each table. The player immediately clockwise from the small blind posts the “big blind”, which is usually twice the size of the small blind. Blinds can vary so make sure you check before you join a table.

In some games, particularly tournaments, each player may also be required to post an ‘ante’ at the beginning of each hand into the pot. This is also compulsory and helps to increase the pot size.

Once the dealer has delivered the ‘hole cards’ the first player clockwise to the big blind must decide what to do. They have the option to ‘check’ or ‘bet’. If that player doesn’t bet then all other players have the option to check i.e. not betting but keeping their cards. If that player places a bet (minimum bet is equal to the big blind), then subsequent players can fold, call or raise. To call is to match the amount the previous player has bet. A raise is an increase on the previous bet.

For example, if the big blind was 2, it would cost other players 2 to call, or at least 4 to raise. Action then proceeds clockwise around the table until all betting is complete.

Exactly which options are available therefore depends on the action taken by the previous player. Each player can bet up to the value of the pot (as explained above).

Next comes the flop, where the dealer places three cards face-up on the board. These are community cards. They are available to all players still in the hand. Betting on the flop begins with the first remaining player immediately clockwise from the button.

Once betting is complete, the turn card is dealt face-up on the board. The turn is also a community card. Another round of betting is available now once again beginning with the active player immediately clockwise from the button.

Finally, the river card is dealt face-up on the board. The river is the fifth and final community card and the dealing is now complete for that game. Betting again begins with the active player immediately clockwise from the button, and the same betting rules apply as they do for the flop and turn.

If there is more than one remaining player when the final betting round is complete, the last person to bet or raise shows their cards, unless there was no bet on the final round in which case the player immediately clockwise from the button shows their cards first.

The player with the best five-card poker hand wins the pot. In the event of identical hands, the pot will be equally divided between the players with the best hands.

After the pot is awarded, the button moves clockwise to the next player and the next hand is ready to begin. Blinds and relevant antes are placed, and hole cards are dealt to each player.